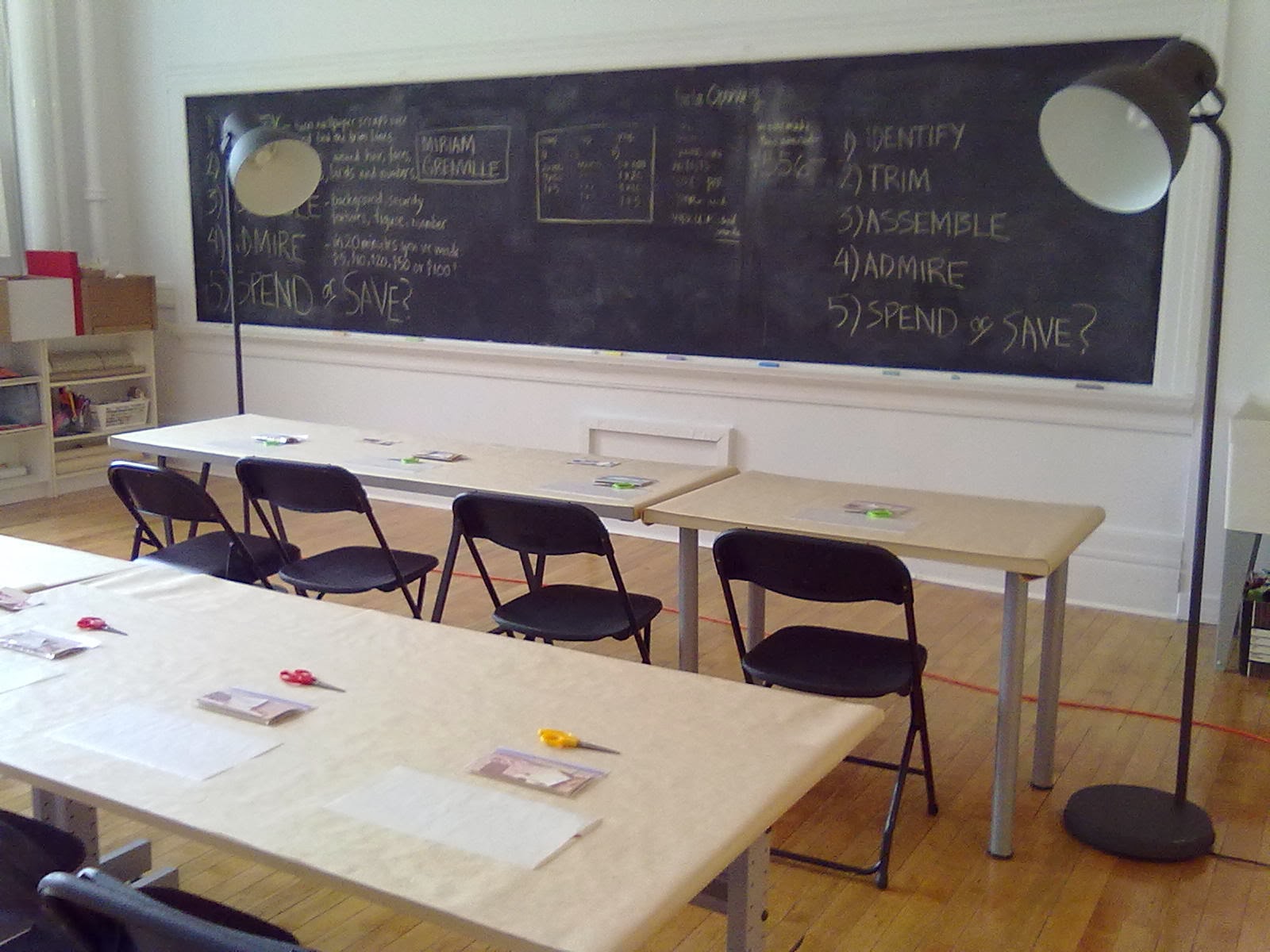 I am pleased to announce that I am now a “Teacher-In-Residence” at Artscapes Youngplace.  Over the next 6 weeks, I will be offering a “withing” class.  The purpose of “withing” is to create an environment where artists, designers, friends and community members can come together to finish off those pesky projects with each other. Whether it is a grant proposal, artist statement, resizing photos, wedding thank you cards or mending, bring that project that is holding you back, and finish it off.  Dedicating time to your unfinished project away from your daily environment, and with other people, will create an encouraging energy that will help you get it done.

The studio will be open from 1-5, but you do not have to come for the duration.
Suggested donation of $5 hour to cover the cost of the studio.

Please let me know if you plan to attend, and I will alert you to the exact studio location.
miriam@grenvilledesign.com


Posted by miriam grenville at 6:56 AM No comments:

Two nights of celebrations at Artscape Youngplace has resulted in a lot of money being made! It was a pleasure to meet so many supporters of Artscape.

Posted by miriam grenville at 3:44 PM No comments:

What an amazing week this has been! Between the Open House and the fundraiser, Hall Pass, 36 individuals have made money! Family, friends, Youngplace neighbours from Inspirit and Luminato, as well as Iler Campbell and Price Waterhouse Coopers, have spent time cutting, pasting and making beautiful copies of the 'Birds of Canada' series banknotes.  Thanks to all for supporting Artscape Youngplace! 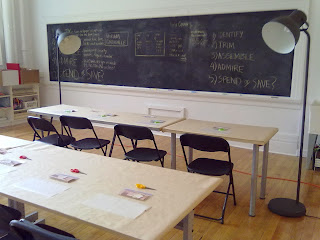 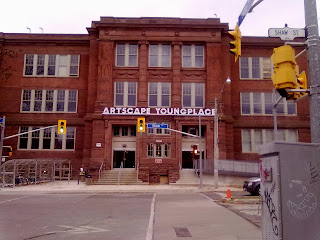 Posted by miriam grenville at 3:43 PM No comments: 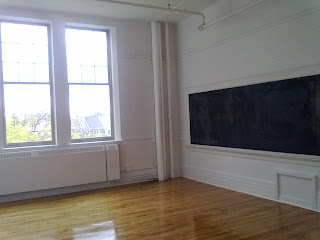 After sitting vacant for more than a decade, the former Shaw Street School at 180 Shaw Street has undergone a $17 million transformation to become a new community cultural hub. Known as Artscape Youngplace, it will soon be the largest cultural institution in the West Queen West area, one of the country’s most creative neighbourhoods and a major centre for contemporary art in Canada.

Please visit me in my new studio, as the doors are finally flung open and the neighbourhood, the tenants, their friends, colleagues and families are invited in, for one exciting evening, to rediscover this new old building.  Be nosey, snoop around the hallways and meet the other artists, designers, dancers, photographers, musicians, actors, curators, film and videographers who call Artscape Youngplace their new workspace. 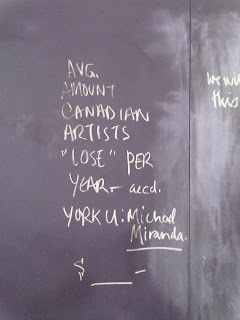 During the open house, you can make money! Details on the denominations to follow.
Posted by miriam grenville at 4:20 PM No comments:

Take a resource from the landscape

give the resource value

Reveal the process of this transformation

give the value away.

Making Money is based on the performance of Fool’s Gold by Kathryn Walter, presented at Counterposes, (curated by Jim Drobnick and Jennifer Fisher) in 1998.  Her work exposed the process of creating value, not only in the art world, but also by exploiting natural resources, Canada having so many.  By donning a white lab coat, and positioning herself with a scientific “front”, she painted pieces of gravel with gold paint, and invited the audience to take a piece home.  Thus, the gold gravel became relics of an art performance, and entered circulation in the art market. My response to this performance producing a residue capable of entering the art market, (either purchased or given away) was to also create a residue/relic of performance, while also attaching a tag with its provenance.
During the week of November 17-21nd, 2012, I performed Making Money.  Each morning I donned business attire, did my hair and put on lipstick.  I travelled the short distance to my design studio, but instead of using gouache, brushes, scanner and Photoshop to turn ideas into textile designs and (hopefully) money, I turned neglected resources (old wallpaper books, papers) into
home made money. 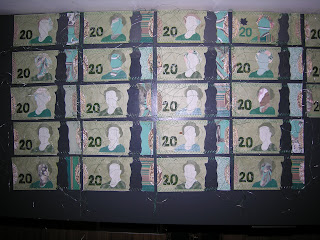 The new Canadian Twenty dollar bill is printed on a plastic material, and to recreate this, I had to use vinyl in my bills, which was a departure for me.  Fortunately, I had just enough left over from another project to make 22 new bills.  Each separate feature on my homemade money was selected from a paper that corresponded in colour to the actual bill.  All the pieces were cut out and assembled at my studio.  On the final day, I took my sewing machine to work, and sat at my desk, making money.
However, the performance of creating the money was just the beginning.  The performance was not complete until the bills were given value.  Just making them appear like the twenty dollar bill in circulation does not give them value.  Only through exchange could value be given.  On November 23rd, I gave the money away to my classmates.  With each bill was a tag, giving the name of the performance, the date of performance, and my name.  By attaching a provenance to the money, it may circulate with a residue of myself attached to it, not as an inert object, but as a gift that may begin a chain of actions. 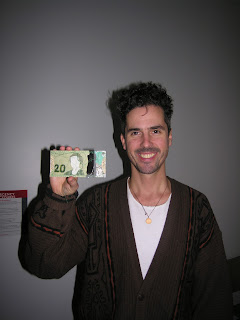 I also enclosed a self addressed stamped postcard, so my classmates could report back to me their experience with the money.  So far, I have had 4 responses. 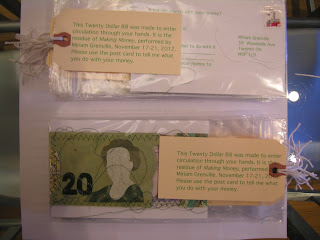 Especially important to this performance is the repeated condition of explanation.  No matter how the money is dealt with, at some point an explanation of it must be given.  This explaining is the crux of the performance.  Each time someone else explains the idea of homemade money, art and value, an additional conversation takes place between two people I do not know, that I could not possibly have.  These conversations/performances and ideas then become attached to the money.
This performance takes place between art and living.  Money is a means of transporting the value of commodities or labour conveniently, by agreeing upon a form (bank notes) and their relative value to things.  The money I made has neither of these qualities.  It is an artwork, made as the residue of an artwork. The form is obviously based on the form of currency, but is not legal tender.  The value of the money is unknown, until it is exchanged for something of similar value decided upon by the person receiving it.  This exchange has to be negotiated, either as barter, or in advance of the purchase.  To expect my money to be accepted at a cash register puts the worker on the other side in the position of having to decide to accept the possibility of having to pay back the $20.00 from his pocket.  The conversation about value cannot take place under pressure, so I do not recommend trying this.
Questioning the role of currency and art in daily life is at the heart of Making Money.  I would like to perform this work again as a durational piece, with an audience- who could help make money, or not.  It would be a conversation starter. I would be available to talk to people about what you can do with home made money, and the implications of creating your own currency.

Posted by miriam grenville at 8:46 AM No comments:

A Little Art with your Easter Chocolate?

A selection of my work is currently on display at Coco Organic Chocolate, at  365 Jane Street, Toronto.  While you have a hot chocolate, 'pour over' organic coffee, or select a box of truffles, check out my suitcase full of money!  If you decide to Take the Money and Run, please remember you can only use it to buy other people's art! 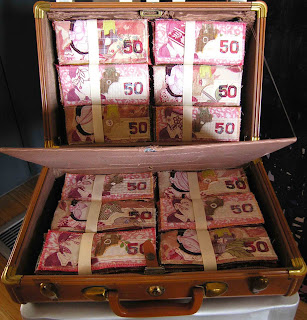 Posted by miriam grenville at 4:57 PM No comments:

The Rooms Provincial Art Gallery in St. John's and the Craft Council of Newfoundland are currently showing the Boxed In! exhibition-- curated by the charming and hospitable Denis Longchamps-- which features my small work "You really need to make some money."

This picture was taken by Ned Pratt, and is truly one of the best images I have! 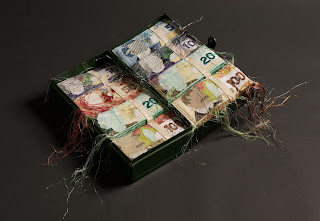